Theodore House has always been described as a “retreat and study centre”. A key feature of any such place are, of course, books. Books to browse, to ponder, to draw solace from, to inform one’s knowledge, to expand one’s understanding, to acquire wisdom from. As you enter Theodore House’s spacious atrium, the door facing you from the left and back of the atrium carries the inscription “Hardwick Library”.

Peter and Brigid Hardwick were well-known as pillars of the Stonyhurst community, bringing the benefits of their wisdom and learning to the school for over 50 years. The Guardian’s obituary described Peter as “an English teacher of exceptional brilliance and inspiration, despite a complete lack of pedagogical training or qualifications”, and Brigid was the first woman on Stonyhurst College’s staff. The library was named after them for their profound influence on generations of Stonyhurst students, and for the kind bequest made of some of their books to the charity. Lord Alton paid tribute to them in this article, in which he noted the importance of books for education, whose ultimate aim is to prepare us for death – and the life to come!

To date, the “Hardwick Library” has remained a room used for meetings. The planning of a library, the seeking of funds for furnishing and of books to fill the library have all required time from amongst the many competing priorities.

So it is with great pleasure that we have finally moved this project forward. With some funds having been received from a generous donor, a basic scheme was agreed. In the meantime, the core of the CHC’s book collection had already been formed by the acquisition of Stratford Caldecott’s personal library, and by Karol Gajewski’s bequest.

With the financial limitations of our funding, the furnishing needed to be economical yet effective. IKEA’s timeless and ubiquitous Billy bookcases formed the backbone of the scheme, which aimed for all-round, floor-to-ceiling (nearly) shelving. Using two bookcase extension units on each cabinet, the shelves reach to just the right height to allow for some over-cabinet lighting.

Once assembled, Stonyhurst College’s skilled joiners set to work securing the bookcases to the wall and creating a cornice and beading to give the bookcases a touch of class. 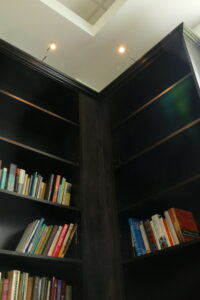 Some careful work by the College’s electricians enabled us to fit another of IKEA’s products – the discreet Urshult cabinet lights. A unit was mounted above each shelf to give a soft glow over the bookcovers. Together with a reliance on low-level lighting (floor and desk lamps), this will create a warm atmosphere during the darker hours.

We are now awaiting to secure four desks, which will occupy the positions under the windows and between the separated bookcases (right-hand photo below). All that will remain will be to complete the furnishing with a warm rug and some comfortable high-backed armchairs. Donations towards these will be gratefully received!

IKEA have neither sponsored the library nor this post (though they are quite welcome to!). 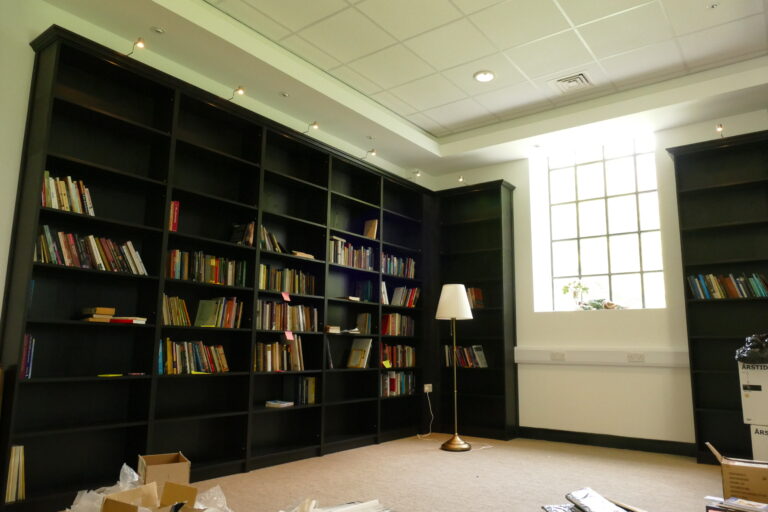 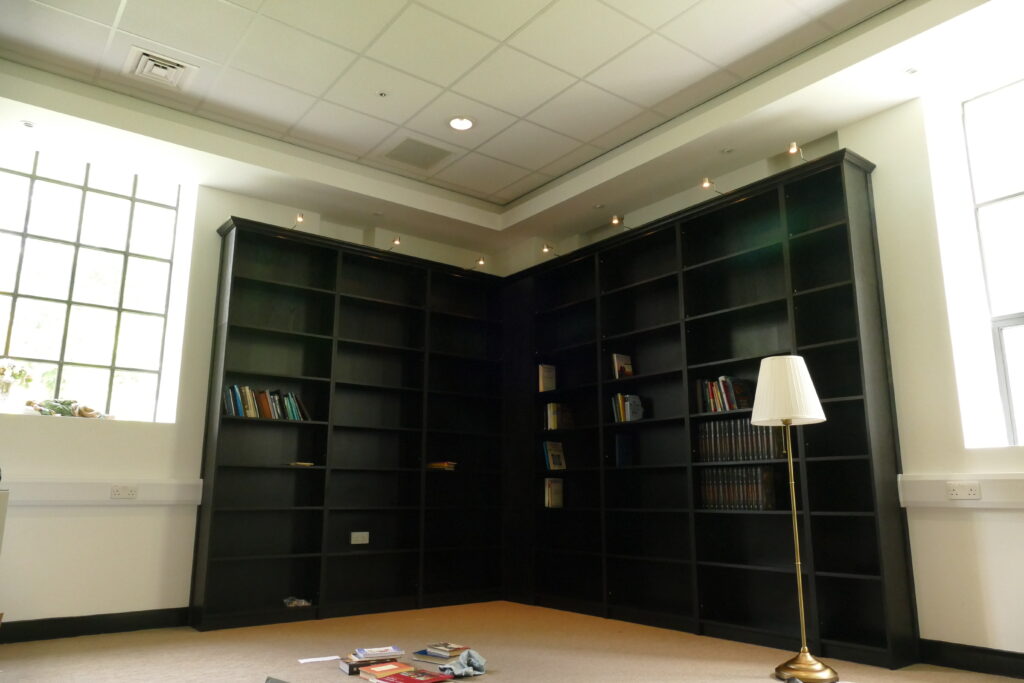 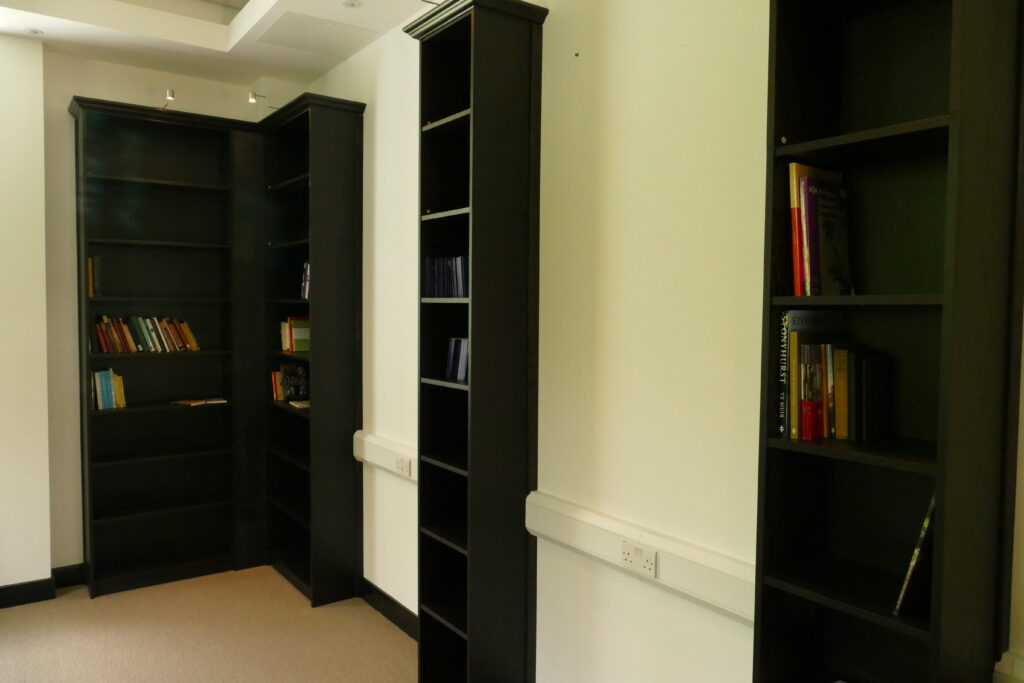 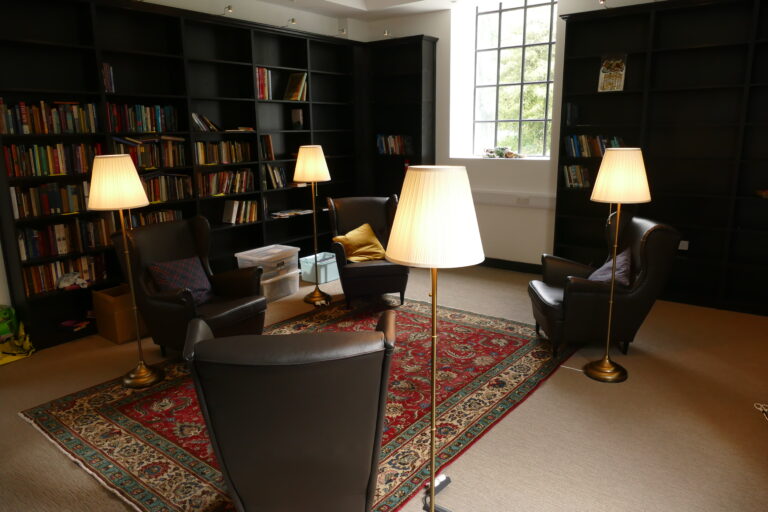 A beautiful rug originating from the city of Tabriz, in Iran, has arrived. Tabriz was originally the capital of the Safavid dynasty in East Azerbaijan, and the oldest carpet-production centre in the country.

It has been matched with four, comfortable leather armchairs, to create a cosy reading environment.

The various collections of books are slowly finding their way onto the shelves in the meantime, while we continue to look for suitable desks and chairs to complete the picture.