The Gothic Architectural as an Expression of Faith

The Christian Philosophy and Science of the Medieval period produced the “Gothic” style, as an expression of the Catholic worldview

The medieval period in European history is sometimes described as an “age of Faith”. This era also saw the flowering of the Scholastic method in the universities that were established throughout the Christian world, and gave rise to philosophy, science, and arts founded on a Christian vision. This paper argues that this flowering of Christian thought also resulted in a distinctive architectural style, the so-called Gothic style, that continues to inspire and attract people. The recent tragic fire at Notre Dame Cathedral in Paris called our attention once more to the ingenuity and beauty of medieval architecture. Even in a secular world, the power of Gothic architecture remains, doing as their designers intended, which is to lead us to contemplate Him who created the world with all its complexity and majesty, and who yet “dwells in inaccessible light” (1 Tim 6:16). 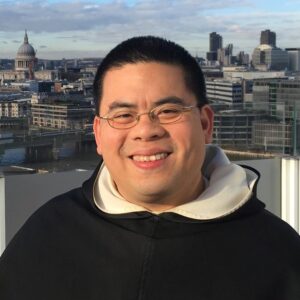 Father Lawrence Lew, O.P. was born in Kuala Lumpur, Malaysia into an evangelical Protestant family. Fr Lawrence’s conversion to Catholicism began an on-going love for theology, apologetics, Catholic culture, music and the sacred arts. Fr Lawrence has a degree in English civil law from Leeds University. Entering the English Province of the Order of Preachers in 2005, Fr Lawrence was trained in Cambridge, Blackfriars in Oxford, and the Dominican House of Studies in Washington DC where he gained a license in Sacred Theology. He has served as assistant Catholic Chaplain to Edinburgh University, and he is currently assistant parish priest in London. Fr Lawrence lectures in Apologetics, and Mariology at Blackfriars Hall, Oxford. Fr Lawrence enjoys photographing churches and sacred art, and his photos have been used online by major Catholic sites, and is seen in print internationally in newspapers, magazines, books, and CD covers. He has been called a “media missionary”, and he has given workshops and retreats in photography, evangelisation and digital media, and the theology of beauty.